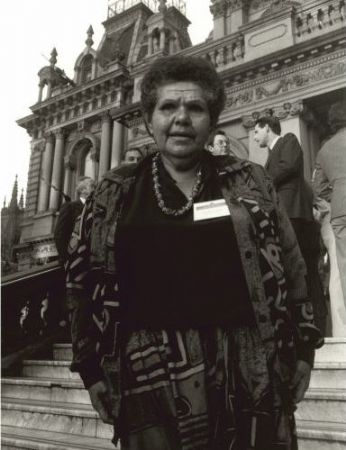 Shirley Smith, affectionately known as 'MumShirl', has been variously described as both a hero and a saint. A Wiradjuri woman, she was born Colleen Shirley Perry in about 1924 on the Erambie Mission near Cowra, and grew up with her grandparents. She shared an especially close relationship with her grandfather and, even after his death, often looked to him as a source of spiritual and emotional strength. She began her lifelong welfare work after her brother's imprisonment, when she realised that many of his fellow inmates had no visitors, nor anybody with whom they could discuss their problems. Initially at her brother's suggestion, she began to visit other prisoners in the gaol and, later, began to extend her visits to other gaols in New South Wales. Eventually, the Department of Corrective Services allowed her access to all its prisoners. She earned the nickname 'MumShirl' through her visits to the inmates. It reflected both the affection and the regard in which they held her.

It was the same outside the prison system. Her voluntary efforts for prisoners, both black and white, soon led to her offering assistance to Aboriginal people around Sydney. She often found shelter, food and friendship for those recently arrived in the city, and worked tirelessly for the vulnerable, especially children, single mothers, the destitute, the homeless and the alcoholics. Many of these people would find a home with her and, over the years, she took in over 60 children. In her autobiography, she remarked that her life was sometimes a lonely one. But her capacity to ease the difficulties of other people's lives, and her willingness to give much of her own time (and often, her own money) to assist those in need meant that she was often sought out by Indigenous people from all over New South Wales and sometimes, further afield.

MumShirl's life was her work. She lived and worked among the people she helped, and often suffered her own problems of poverty as a consequence. Although she had a number of allies who strove to assist her welfare efforts, she drew her greatest strength from God, developing close relationships with a number of Catholic priests and nuns in the process.

Apart from these enormous contributions to the Aboriginal community, MumShirl was also influential in land rights struggles, including the Aboriginal Embassy, the Aboriginal Legal Service, a detoxification centre at Wiseman's Ferry, and Aboriginal housing issues. In particular, she is well remembered for her role in helping to found the Aboriginal Medical Service in Redfern, where she was later employed and continued her valuable community work.