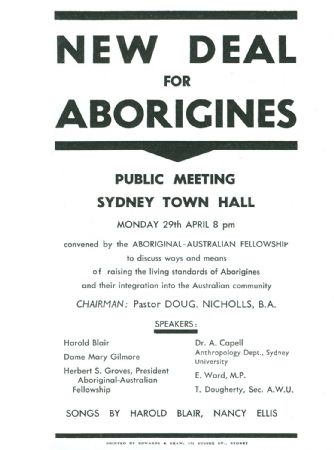 The Aboriginal-Australian Fellowship (AAF) came into being in 1956 as a result of discussions between Pearl Gibbs and Faith Bandler. Gibbs recognised that white support was necessary in the work to reform the New South Wales Aborigines Welfare Board and to improve conditions of life for Aboriginal people.

The AAF was one of the new post-war organisations working for social and legislative reforms which counted both Aborigines and non-Aborigines among its active members. A diverse membership developed which included members of the Communist Party of Australia, artists, writers, members of the Jewish community and members of Christian churches. It was a founding member of the Federal Council for Aboriginal Advancement and sent representatives to the initial 1958 meeting in Adelaide.

Public attention first turned to the AAF when it held a meeting in the Sydney Town Hall on 29 April 1957. At that meeting, prominent Aboriginal Australians such as Doug Nicholls, Harold Blair, Bert Groves and Bill Onus spoke. A petition was launched to call for a referendum to amend the Australian Constitution so that the Commonwealth government could have direct responsibility for Aboriginal affairs.