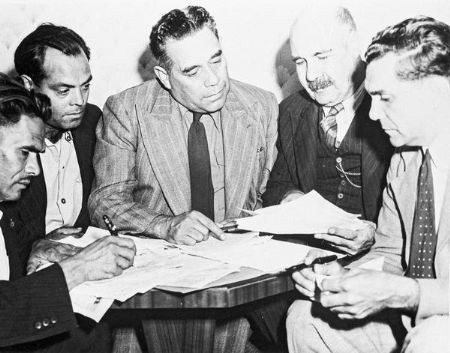 The Australian Aborigines' League grew out of discussions held by William Cooper, a highly regarded Cummeragunga man who came to Melbourne during the Depression when forced to leave his home if he wanted to be eligible for the old age pension. Members included Margaret Tucker, Caleb and Anna Morgan and Shadrach James.

An early initiative was William Cooper's initiative to petition King George V for representation in Parliament for Aboriginal Australians. In 1938 the League joined forces with the New South Wales Aborigines Progressive Association to stage a Day of Mourning on Australia Day, 26 January, the sesqui-centenary of what Cooper described as 'the whiteman's seizure of our country'. This dignified alternative to the celebrations drew attention to the callous treatment of Indigenous Australians and asked for full citizens' rights and equality.

Following Cooper's death in 1941 the League was less active, but it was revived by Doug Nicholls and Eric and Bill Onus after the Second World War. In the 1960s it became the Aboriginal branch of the Aborigines Advancement League (Victoria).