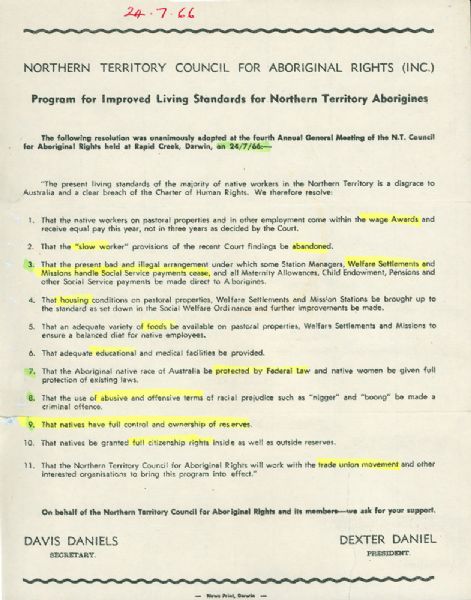 Program for Improved Living Standards for Northern Territory Aborigines
Source: Council for Aboriginal Rights (Victoria), MS13913, State Library of Victoria
The Council confronted discrimination wherever it emerged, whether it be the right to be served in a hotel or the right to sit anywhere in a picture theatre. NTCAR demonstrated against the mandatory jailing of Aboriginal citizens for sharing alcohol with relatives who were wards of the state. It assisted Aboriginal employees to obtain award wages in the railways and on the wharf.

From 1966 the Gurindji walk-off became the focus of activity with the NTCAR providing support for striking workers and publicity about the issue. Following the untimely death of George Gibbs in 1976 the Council was wound up by Moira Gibbs. By this time, as a result of Whitlam government initiatives, consultative bodies had been set up in the Northern Territory and elsewhere.