Ada Bromham brought together a number of existing bodies into one Council to represent Queensland when a federal organisation was being planned late in 1957. Members were both black and white, with Kath Walker (later Oodgeroo Noonuccal) playing a very active role throughout the life of the Council. In the early 1960s a schism developed among those members, often described as 'lefties' or communists, who were prepared to challenge racist Queensland legislation, and others who were less prepared to rock the boat. This latter group formed the One People of Australia League (OPAL).

The Queensland Council for the Advancement of Aborigines and Torres Strait Islanders (QCAATSI) played a leading role in a number of national campaigns, especially for the referendum and the campaign for land rights. Other active members included Lambert McBride, Celia Smith, Kathy Cochrane, Rodney Hall and Daisy Marchisotti. QCAATSI organised the fourth annual conference of the Federal Council for Aboriginal Advancement, held at the University of Queensland in 1961. 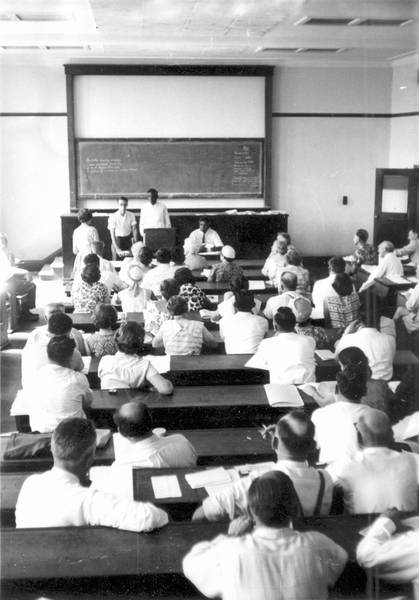 This Federal Council for Aboriginal Advancement conference was held at the University of Queensland. Don Dunstan was the retiring president.
Source: Courtesy Ian Spalding