Lambert and May McBride 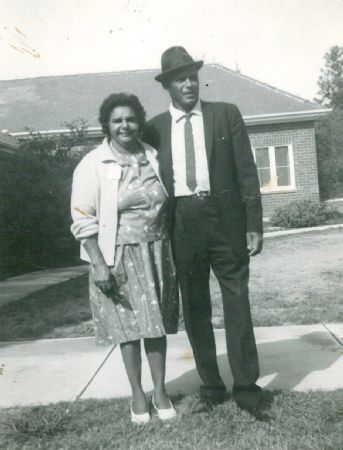 Source: Courtesy Linda McBride-Yuke. May and Lambert McBride in Canberra.

'Lambie' McBride, as he was known, was a Bandjalung man who was born at Grady's Creek near Kyogle, New South Wales. For many years he was the honorary secretary of the Queensland Council for the Advancement of Aborigines and Torres Strait Islanders (QCAATSI), the main Brisbane-based organisation which was affiliated with FCAATSI. He also served as the Queensland president of QCAATSI. Lambie's wife and partner in life, May, was the QCAATSI publicity officer for a time and was a back room supporter of her husband's campaigns.

Lambie was a contributor who was prepared to go in to bat for someone who was being treated unjustly. In the 1960s and throughout the 1970s he drew on a range of connections he had made over the years as a blue collar worker and on the wharves. He had strong union ties and wrote many letters asking seamen, wharfies, plumbers, electricians, building workers and meat workers for moral and financial support in the work for Aboriginal justice.

Lambie was involved in many campaigns through the 1960s, including the 1967 Referendum campaign and opposing the Queensland Aboriginal protection legislation, considered at that time to be the most repressive in Australia.

He was also involved in the negotiations which led to the formation of the National Aboriginal Advisory Council, the first such body to advise the federal government in Indigenous affairs. He joined Aboriginal Hostels Limited in the 1970s and continued his involvement in working for Aboriginal people and opposing injustice until his death.

Lambie received a number of awards throughout his life. He was awarded the War Service Medal and the Australian Service Medal in recognition of his war service in the 15th Battalion (transport division). His work was honored when the local member for the Brisbane City Council Ward of Marchart, Terry Hampson, officially opened the Lambert McBride Park at Muller Road. In 2007 the Queensland Minister for Aboriginal and Torres Strait Islander Policy, Warren Pitt, announced the Lambert McBride Perpetual Bursary of $100,000 for Indigenous students enrolled in a Queensland university.