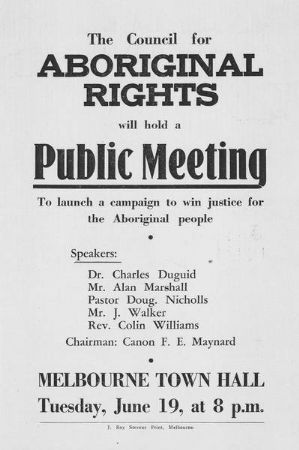 On 16 March 1951, a new Aboriginal rights body with a national focus was formed in Melbourne, despite the fact that the catalyst for this action took place in Darwin. Residents of the Berrimah Aboriginal Reserve had gone on strike for better wages and for equal legal rights. The high-handed response of the Territory's Department of Native Affairs in exiling Fred Waters, a Larrakia man and one of the strike leaders, to Haasts' Bluff Reserve, 250 kilometres west of Alice Springs and 1800 kilometres from his Darwin home, brought the issue to public attention.

Writer Alan Marshall, Dr Charles Duguid and Pastor Doug Nicholls addressed a meeting at the Melbourne Town Hall in March 1951. Here, people learned that the principle of habeas corpus, which protected citizens against arrest unless they were charged with an offence, did not apply to Aboriginal Territorians. Nor did award wages. They also learned that Aboriginal people could not drink alcohol unless they were exempted from the Aboriginals Ordinance, that their movement in towns was controlled and that, like Fred Waters, they could be moved away from their homes whenever the authorities chose to move them.

A new multi-racial body was formed which was prepared to concern itself with cases of injustice experienced by Aboriginal Australians regardless of where they lived. Its aim was to 'plan, conduct and organise the widest possible support for a campaign to obtain just and humane treatment' for all Australian Aborigines. The Council determined that it would be guided by the 1948 United Nations' Universal Declaration of Human Rights.

Membership included representatives from unions, the University of Melbourne, the Council for Civil Liberties, women's organisations and Christian and Jewish faiths. Moreover, individual members and affiliated organisations came from all states and the Northern Territory. Drawing on the issues of unequal working conditions and the effect of the weapons testing in the desert and its likely effect on nomadic people, Alan Marshall and Charles Duguid drew 900 people to a further public meeting in the Melbourne Town Hall in June 1951.

Shirley Andrews became the secretary in 1952, a position she held until 1961 when Pauline Pickford took over this position. Charles Duguid, president of the South Australian Aborigines Advancement League, considered that the Council was the most vital body engaged in investigating Aboriginal issues in the early 1950s. In 1957, Barry Christophers became president, a position he held for many years. The Council for Aboriginal Rights was a founding member of the Federal Council for Aboriginal Advancement and was represented at the Adelaide meeting which set up the federal body.