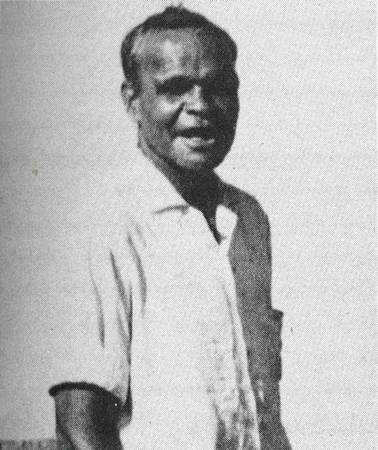 Source: Don McLeod, How the West was Lost, Port Hedland, 1984

The son of a Nyamil woman and an Irish father, Clancy was born in 1909 and raised by his mother in the Nyamil camps on Pilbara cattle stations in Western Australia. He was initiated into Nyamil Law as well as learning the white man's skills as a musterer, fencer and wool-picker. Always aware of his mudamuda (Nyamil term for a person of mixed descent) status, Clancy was conscious of the injustice of the dual pay scales on the stations where he was paid a pittance because he was not a white man. In the mid 1940s he was introduced to Don McLeod by another Nyamil man, Dooley Bin-Bin.

Don McLeod offered an alternative to exploitation on the white men's stations. He provided a vision of greater autonomy for Aboriginal cattle workers in the Pilbara, and a method for achieving it. Persuaded of McLeod's sincerity Clancy, along with Dooley Bin-Bin, helped to organise the 1946 strike of Aboriginal workers on Pilbara stations.

Clancy was then involved in the cooperative companies which McLeod established. Later, he joined up with Peter Coffin's group which broke away from McLeod and established the Yandeyarra Station.

Kingsley Palmer and Clancy McKenna, Somewhere Between Black and White: The Story of an Aboriginal Australian, McMillan, Australia, 1978