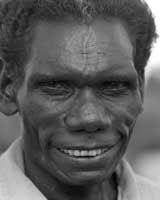 Dadaynga Marika was the youngest surviving brother of Mawalan, the highly regarded leader of the Rirratingu people of north-east Arnhem Land. He gave testimony to the select committee inquiring into the grievances of the Yirrkala people when they learned that the Commonwealth government was in negotiation with a mining company wanting to mine their land. He was a signatory to the bark petition which asked the federal government to consult with the Yolngu people over their traditional lands before it leased them to mining companies. Later Dadaynga took a key role in negotiating with Nabalco over the mining of bauxite on Yolngu land. He formed a strong relationship with Nugget Coombs of the Council for Aboriginal Affairs. He was awarded an OBE in 1971 for services to his people.