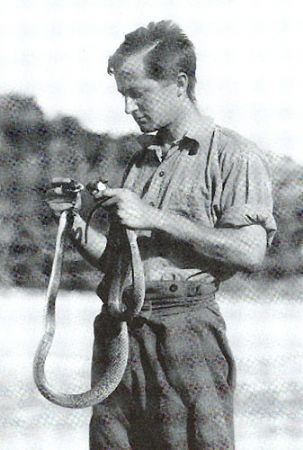 Source: Bruce Rigsby and Nicolas Peterson (eds), Donald Thomson: the man and scholar, Academy of the Social Sciences in Australia with support from Museum Victoria, Canberra, 2005

Anthropologist Donald Thomson lived for years among the people of Cape York Peninsula in Queensland and Arnhem Land in the Northern Territory. He had learned the languages and customs of the people and later as a government patrol officer, lived in Arnhem Land as an accepted member of the social group.

These experiences in the 1920s and 1930s led to Donald's view that contact with white society would be socially and culturally destructive for Aboriginal people in the north of Australia. He argued that they should be given reserve land so that they could be segregated from white society. Minister for the Interior, John McEwen, however, was moving towards a view that integration within white society was inevitable. Donald favoured the development of a policy which would allow Aboriginal people to work out their own destiny, as the dispossessed owners of the land. He drew attention to government inconsistency in recognising native land tenure in Papua, but failing to do so in Australia.

In 1947 he joined Charles Duguid, Doris Blackburn and others in opposing the development of a rocket range across the Central Australian Reserve. He predicted that the establishment of the Woomera Rocket testing range would have a devastating effect on the lives of desert-dwelling Aboriginal people, but the project went ahead nonetheless. His 1947 pamphlet, 'The Aborigines and the Rocket Range' sets out his opposition to this scheme.

The Aborigines and the Rocket Range, Donald Thomson, May 1947

In the 1960s Donald Thomson wrote and spoke in support of the retention of Lake Tyers by the Aboriginal residents. Initially he had held that people in the south had entirely lost their culture but as a result of his interactions with people from Lake Tyers he came to see that the people did have their own individual culture and that they were attached to their traditional lands.

Bruce Rigsby and Nicolas Peterson, Donald Thomson: The Man and the Scholar, Academy of Social Sciences in Australia, Canberra, 2005