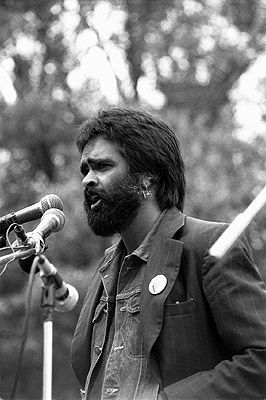 Gary Foley is of Gumbainggir descent. He grew up in Nambucca Heads, on the New South Wales mid-north coast, and moved to Sydney in 1967. He became active in Indigenous politics shortly afterwards, working in the Federal Council for the Advancement of Aborigines and Torres Strait Islanders (FCAATSI) head office in Sydney and taking part in the protests against the South African Springbok rugby tours.

In the following years, Foley aligned himself with a group of radical Indigenous activists who utilised some of the style and language of the Black Power movement in America. This group, actively committed to working for change within their urban Aboriginal communities, were impatient with the slow pace of change and favoured a more militant approach to social change. The group initiated a campaign to counter the problem of police harassment in Redfern. This led directly to the formation of the Aboriginal Legal Service and the Aboriginal Medical Service in Redfern in 1970 and 1971 respectively. Foley was also active in the Aboriginal Embassy in 1972 and with the National Black Theatre in Redfern. It was here that he began his acting career by performing in 'Basically Black', the first Indigenous stage production.

In the last thirty years, Gary Foley has worked as an actor, academic and curator. He has served on the Aboriginal Arts Board, has been a consultant to the Royal Commission into Black Deaths in Custody and on the executive of the National Coalition of Aboriginal Organisations. He continues to speak out on matters which concern Indigenous Australians.