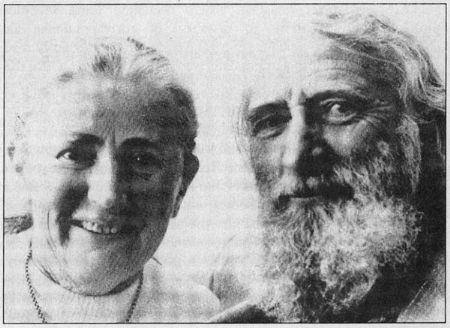 Jack Horner and his wife Jean joined the newly-formed Aboriginal-Australian Fellowship in 1957 after attending the launch of the Fellowship's petition campaign in the Sydney Town Hall. This was a petition for constitutional change to empower the federal government in Aboriginal affairs. From 1958 to 1966, Jack Horner was the hardworking Honorary Secretary in the Fellowship, during which time he came to understand conditions of life for New South Wales Aboriginal people and campaigned for the repeal of the New South Wales Aborigines Protection Act 1935. In an interview in 1996 he recalled Alex Vesper's concern about land which he voiced at each annual conference with passion and persistence.

Sue: I was going to ask you about Alex Vesper. Many people remember him speaking about land rights at that conference.

Jack: He spoke about land rights. What I wanted to say was that during a lunchbreak, I was talking to Alex Vesper. He said to me, 'You know, I should never have - AP Elkin and the other members of the Welfare Board came and took us off the land at Stoney Gully'. He says, 'I should never have allowed them to do that. I was responsible for that land'. And this was 20 years afterwards. He was still hurt and he was still annoyed that he could not stop those men from taking them off the land. So this was a reason for his concern about land rights: that he'd not really acted when he should've done.

From 1959, Jack Horner was also involved in the federal movement. He was vice-president of the Federal Council for Aboriginal Advancement (FCAA) in 1959 and 1960, later serving as a secretarial consultant and, in 1969, as General Secretary. Horner alerted delegates to the amount of Aboriginal reserve land in New South Wales that had been revoked or leased to white farmers. Horner believed that the strength of the Federal Council for the Advancement of Aborigines and Torres Strait Islanders (FCAATSI), as it became in 1964, lay in its alliance of blacks and whites opposing racial discrimination, both social and legislative. Jack emphasised the roles played by the churches in the federal movement in Aboriginal affairs.

Can I just say a bit more about the Council? The Australian Council of Churches joined the Federal Council just about the time of the Referendum. Frank Engel brought the land rights issue to 1964 and he was the first one to take it on. And at the 1967 Referendum I went round to the Australian Council of Churches. They gave me a complete list of all the heads of churches with their addresses. And I wrote to all of them. And because they had to take part in it - you see it was a referendum - everybody had to take part. So all the churches had to understand what it was all about. And this meant that - I think - for the first time churches like the Russian and Greek Orthodox - people like that - were coming to Aboriginal affairs for the very first time and they didn't know anything about it before. And so after that they took a more formal interest. And they were very positive after that. We'd be able to get from them, help in helping the Aboriginal people at Gove get their land rights there. They formed a Methodist Aboriginal Committee in Melbourne which helped the people in Gove.

In 1969, at a time of change and instability, Horner was the secretary of FCAATSI. When the organisation came to debate the role of non-Indigenous members at the 1970s conference he held firmly to the view of FCAATSI as a multi-racial alliance. He believed that the continuation of Indigenous and non-Indigenous people working together was the best model for achieving political goals.

In an interview in 1996 she spoke about the people who made the greatest impression on her. These were not the articulate public figures. Rather they were people who, for the first time perhaps, were coming to realise that they were not alone in their struggles for justice.

I remember one conference in Canberra where we had Jean Jimmy from Mapoon, and a man whose name I can't think of who came from Carnarvon. And, oh the thing that the Aboriginal people picked up was hearing the stories from all over. I remember this old man from Carnarvon. He got up and said, after what we used to call the grievance session - you know, everybody would get up and talk about conditions on their reserves or problems they were having with the police or whatever. This old man stood up and he said, 'I've been listening to these accounts of problems of my brothers around Australia and we thought we were the only people who had problems, that the problems were ours and we had to fight them, and now I've discovered that other people have the same problems'. You know that was the sort of things that I remember from conferences, rather than the speeches of Nugget Combs or Dexter or somebody official, the official speakers or even Joe McGinness or whatever.

Source: The extracts on this page are from interviews with Jack and Jean Horner conducted by Sue Taffe on 5 December 1996