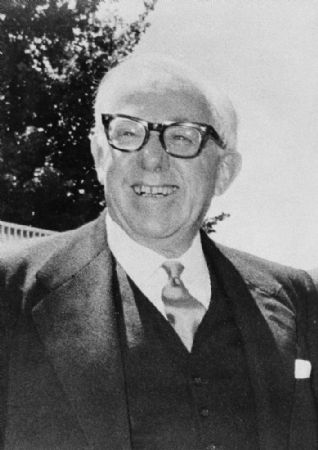 At a time when few federal parliamentarians showed much interest in Aboriginal Australians, Bill Wentworth, a Liberal backbencher, was a forthright spokesman for the Liberal Party on Aboriginal issues. Wentworth spent time each year in Central Australia where his meetings and friendships with Aboriginal people gave him some insights into the difficulties they faced, a respect for cultural difference and the opportunity to think about policy directions which might actually suit the people concerned.

In the mid-1960s, when the federal government was under pressure to amend the clauses of the Constitution that referred to Aboriginal people, Bill Wentworth moved a Constitution Alteration (Aborigines) Bill as a private member which suggested the addition of a new section. This section, which would prevent the Commonwealth and states from making or maintaining laws which were racially discriminatory, showed that Wentworth was ahead of his time in seeking to outlaw racial discrimination. It was not passed, but Wentworth recalls this move as a strategic one on his part:

I can't recall very much [about that private member's bill] except it was part of the tactics I was using to get the party to agree to tack the Aboriginal question onto the 1967 Senate Referendum. And I lobbied very much inside the party and I forced it through the party room.

Yes, there certainly were [people within the party who needed a lot of work to convince them to support the question]. And as I'm saying, the introduction of a private member's bill was part of the tactics I was using to force it through the party room, and I think that the party didn't take it - on the whole, the cabinet didn't take it terribly seriously. But I was able to get support in the party room and I don't, even now, talk about what happened in the party room.

The following year the federal government did decide to hold a referendum on the Aboriginal question. Wentworth discusses here his strategy of linking this move with a proposed referendum concerning the relationship between the number of parliamentarians in the Senate and in the House of Representatives, which the government was keen to get passed.

At that time there was a Senate referendum proposed, and I induced the party to have the Aboriginal question tacked on, almost as an addendum to that Senate referendum. I had a good deal of involvement in the drafting of that question. One of the people I can remember being associated with was Zelman Cowen who subsequently became Governor-General, but there were a number of people at the University with whom I was associated in the drafting of the question. And after a great deal of propaganda, which would have been built on the activities that I'd had in the party room in the five or six years previously, I was able to get the government to consent to the tacking on of this Aboriginal question to the Senate referendum, and as you know it was overwhelmingly passed. But there was very little attention paid to it at the time if you look at the press, you will see all the attention was on the Senate question, which was lost incidentally. And the Aboriginal 1967 question in the public mind went almost by default, but there was an absolutely overwhelming majority in its favour. I was involved in some of the propaganda for that but really I think you can say that the public passed it without thinking very much about it at the time. But the important thing was we got it through. Now I can say that I was, I think, almost solely responsible for the fact that there was a referendum held and that I was largely responsible for the drafting of the question asked at the referendum. That's, I think, about all I can say.

In the post-referendum period, Bill Wentworth was appointed Minister in Charge of Aboriginal Affairs, a position which was particularly difficult as he had no supporting department and was often at odds with Country Party cabinet members. He was sympathetic towards the Gurindji claim for land but his proposals to cabinet on this matter were rejected. Here he recalls his time as Minister in Charge of Aboriginal Affairs.

The administration of Aboriginals prior to the 1967 Referendum was entirely in state hands and I was very dissatisfied with the way in which most of the state governments were handling it. Ah, that was very difficult, because in the party room of course, state matters are very often of predominant importance. But the effect of the referendum was really to give to the Commonwealth government power to make laws, special laws in respect of Aboriginal people. If you remember, the wording of the clause prior to the 1967 referendum was that the Commonwealth government had power - not exclusive power but power - to make laws for any people of any race requiring special laws 'other than the Aboriginal race'. So the effective thing which we took out of the clause was that phrase 'other than the Aboriginal people'. After that referendum the Commonwealth government had power to make laws in respect of Aboriginal people. It did not have exclusive powers because the states retained their powers, but the Commonwealth legislation took precedence over the state legislation. From 1967 onwards this was the position, but it was very much in abeyance because the Commonwealth government was not in the mood to do much about the states, and nothing very much was done. But I was appointed the first Aboriginal minister, actually Minister in Charge, not full minister - I was full Minister for Social Services but I was only Minister in Charge of Aboriginals - and from then on, I tried to do something about it. I had some difficulty in Cabinet because, from 1967 onwards, Paul Hasluck was very much influential and his views were not entirely my views. His views were assimilation as quickly and firmly as possible. He had been Territories Minister for many years previously and he had great experience in New Guinea and he had, I think, the wrong impression, that what you could do with the New Guinea native people was the same as what you could do with the Aboriginal people in Australia, because they were the same. That was an entirely wrong view because they were quite different. So I think that in the ten or twelve years preceding 1968 Paul Hasluck, although he didn't have any formal authority in regard to Australian Aboriginals, was very influential. You know, his policy with the children and so on was, I think, the wrong policy and of course, when I became Minister I saw that the remnants of that policy were swept aside. But the great thing was that I was now able to get some money out of Treasury in order to do something for Aboriginal people. I did originate - as Minister and I was only Minister very briefly for a couple of years - I did originate some of the policies which have subsequently been pursued. I thought for example that whereas assimilation for urban Aboriginals was inevitable, assimilation for tribal Aboriginals should not be pressed too hard, and that their own organisation should have, at least for the time being, a great deal more respect. This was a view which Paul Hasluck did not follow and there was a friction; since he was a senior minister to me, there was some trouble and also I had great trouble with the Northern Territory because Peter Nixon, who was a senior minister and, again, very influential in the Country Party then (and now the National Party) he was rather taking the view of the pastoralists in the Northern Territory, where he was Minister, and so my proposals in the Northern Territory got a very short shrift, but I got some things done. And I did originate a policy, the development of which disappointed me, that is to get Aboriginals in the tribal territories to take more authority in the administration of their own affairs.

Wentworth's final comments in this interview concern HC 'Nugget' Coombs with whom he didn't always agree but whose views he respected.

William: About six weeks ago when I was run over by a car, I was actually on my way to see Nugget Coombs at his nursing home down in North Sydney.

Alistair: He's still having an impact on your life?

William: On my life! But, no, I've always had a great deal of time for Nugget. I wouldn't concur with all his views, either on economics or Aboriginals, but I always regarded him as a person of substance whose views were worth considering and should carry weight. And certainly with regard to Aboriginals, I know that his sincerity in regard to Aboriginal causes was absolutely and completely genuine.

Source: The extracts on this page are from an interview with William Wentworth conducted by Alastair Harris on 29 June 1997