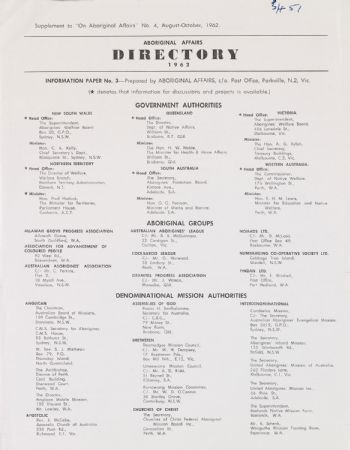 On Aboriginal Affairs was the name of a periodical which set out to inform the Australian public on Aboriginal issues and to encourage readers to think in new ways about these issues. It was produced from 1962 to 1967 by a small independent Melbourne group. Its members were BR Beatty, J Claridge, J Weetman, JB Webb, LM Webb and I Spalding, who was the editor of the periodical.

Seventeen issues were produced during these years and were initially sent to all Australian politicians, welfare bodies that worked with Aboriginal people, teachers and education department heads, churches and significant individuals. The group also produced a series of information papers.

More info on On Aboriginal Affairs, 1964

This publication was valuable in a number of ways. First, it was genuinely independent in that it did not promote views that came from any particular political or religious framework.

Second, it made material available to a wide spectrum of the public who would not otherwise get access to it. Some examples are worth mentioning. An address by Professor Bill Geddes 'Maori and Aborigines: a comparison of attitudes and policies', which he gave to the ANZAAS conference in Brisbane in 1961, provided an opportunity for people to compare, unfavourably for Australia, government responses to the displaced Indigenous peoples in both places. It was printed as an 'Information Paper'. Another example, a parliamentary speech by Kim Beazley senior, was reprinted in which Beazley argued that the time had come for consideration of an Aboriginal title to land. (See National Land Rights Campaign)

Third, On Aboriginal Affairs was distributed broadly in both city and rural areas. It provided information and ideas from overseas and from various parts of Australia. In 1965 it made the International Labor Organisation Convention 107 available as an 'Information Paper'. This Convention concerned the 'protection and integration of Indigenous and other tribal and semi-tribal populations in independent countries'. Although ratified by at least 17 countries at the time of printing, Australia was not one of them.

Lastly, the editorials presented arguments that were thoughtful and often ahead of their time. The March-April 1963 issue presented moral, social and economic arguments for Aboriginal land rights at a time when this term was not in general use. (See National Land Rights Campaign)