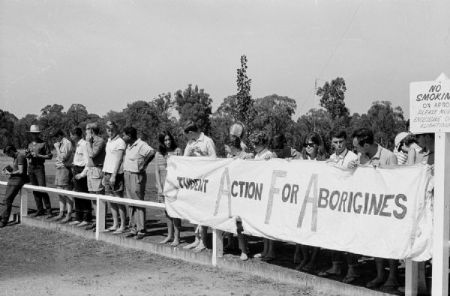 At a time when racism was seen by many Australians as existing mainly in South Africa or the southern states of the USA, University of Sydney students decided on a plan of action which would awaken the community to the reality of Australian racism. Charles Perkins, one of only two Aboriginal students at the University at this time, was elected president of the newly-formed Student Action for Aborigines (SAFA). Interested students came from the ALP, the Newman society, the Jewish Students Union and the Civil Liberties Association.

SAFA hit the headlines when, in February 1965, the students hired a bus and went on a 'Freedom Ride', visiting some of the most racist towns in New South Wales. Public places such as town halls, hotels and swimming pools routinely excluded Aboriginal people on the basis of race. In Moree, Perkins and the other students befriended Aboriginal children who had been barred from entering the town swimming pool.

One of the students on the bus, Darce Cassidy, was also a part-time reporter from the Australian Broadcasting Commission. He filmed and sent footage of ugly confrontations in towns such as Moree and Walgett. Charles Perkins flew to Sydney to take part in a 'Four Corners' television debate with the Shire Clerk of Walgett. The nation's newspapers covered the Freedom Ride and, at the Easter conference of the Federal Council for the Advancement of Aborigines and Torres Strait Islanders (FCAATSI), Charles Perkins reported to an audience of more than two hundred people in Canberra. 'The problem is out in the open now', he told them, and suggested necessary follow-up work such as the building of relationships with local Aboriginal groups, improved services and access to education for Aboriginal residents in western New South Wales towns.

SAFA engaged in some further visits to country towns later in the year but, by the end of 1966, it was finished as a political force.