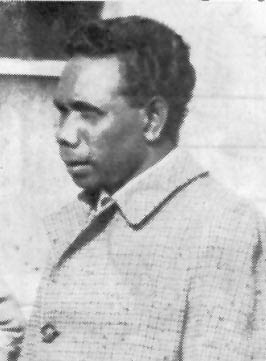 Dexter Daniels, from Roper River in the Northern Territory and brother of Davis Daniels, was a central figure in the Aboriginal pastoral workers' strikes of 1966. These followed the Conciliation and Arbitration Commission ruling which deferred implementation of the equal pay ruling in the cattle industry until December 1968.

Dexter was president of the Northern Territory Council for Aboriginal Rights which was formed in 1962, as well as being the Aboriginal Organiser in the North Australian Workers' Union. In 1966, with Lupna Giari, also known as Captain Major, Dexter toured the east coast capital cities speaking to unionists and public meetings in order to put the case for equal wages to be paid immediately rather than deferred until December 1968. Those who heard them speak were unaware of the meagre wages paid to Aboriginal stock workers and gave generously to the strike fund. This trip was subsidised by the Building Workers Industrial Union and Actors Equity, with Dexter Daniels and Lupna Giari addressing more than 60 meetings over five weeks.