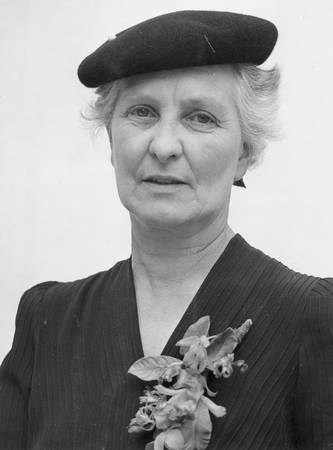 Doris Blackburn, born Doris Horden in 1889, began her long engagement with politics in 1911 when she attended her first meeting of the Women's Political Association. Two years later, Doris worked as campaign secretary for Vida Goldstein. With her husband Maurice, who held the seat of Bourke for Labor for many years, Doris Blackburn campaigned against conscription in 1916-1917. After Maurice Blackburn's death Doris Blackburn stood successfully for the seat as an independent Labor candidate in 1946.

Hers was a lone voice in the federal Parliament when she opposed the establishment of a rocket range in the Central Aboriginal Reserve during the 1940s, partly because of the impact it would have on those people still living nomadically in the desert. She was an active member of the Women's Christian Temperance Union, and in the 1950s was the President of the Women's International League for Peace and Freedom (WILPF). Both of these organisations worked actively for Aboriginal rights and would affiliate with the Federal Council for Aboriginal Advancement (FCAA) in the 1960s. She was an office bearer in the Aborigines Advancement League from its inception and through much of the 1960s. She was present at the Adelaide meeting which established FCAA, and was its president in 1959. Doris drew on her associations in feminist, peace, Christian and labour circles to press for justice for Indigenous Australians.