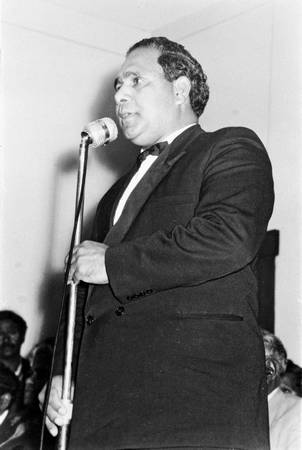 Harold Blair was born on Cherbourg Mission, Queensland, in 1924. With the support of trade unionists, musicians and academics who realised his talent, he studied singing at the University of Melbourne, graduating with honours in late 1949.

His fine tenor voice and a recital tour of Australia in 1951 meant that Blair became a well known figure. He performed at the launch of the Aboriginal-Australian Fellowship's petition campaign to change the Constitution, held in the Sydney Town Hall in 1957. In the 1960s he became politically active, standing as state Labor candidate for the Victorian seat of Mentone. He lost on preferences to the sitting member, the Minister for Transport. Blair joined the Victorian Aborigines Advancement League in the early 1960s, organising a seaside holiday program for Aboriginal children which ran successfully for a number of years.

Apart from working as a singing teacher and performer, Blair was appointed a member of the Aboriginal division of the Commonwealth Arts Board. He died, aged 51, in 1976.