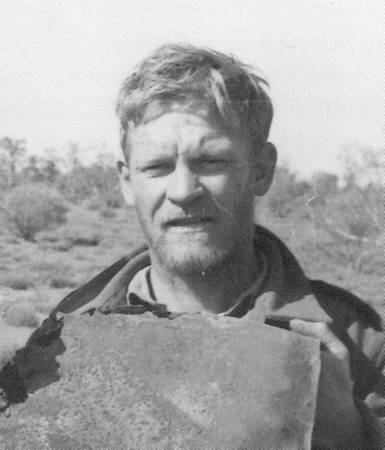 In 1956, William Grayden was the member for South Perth in the Western Australian Parliament. Three years earlier he had led an expedition to the Central Aboriginal Reserve, an area of 34 million acres of desert and semi desert terrain where some Wongi, Pitjantjatjara and Ngaanatyara peoples continued to live as hunter-gatherers.

Concerned about the precarious conditions of their life, made worse by drought and violations of the reserve for weapons testing, Grayden successfully pressed for a parliamentary inquiry. The Report of the Select Committee appointed 'to inquire into Native Welfare Conditions in the Laverton-Warburton Range Area' received wide publicity and shocked those who found out about the starvation and extreme deprivation experienced by these people.

When the findings of the report were questioned by Rupert Murdoch of the Adelaide News, Grayden returned to the area armed with a movie camera and accompanied by Pastor Doug Nicholls and other Western Australian parliamentarians. This film, known simply as the 'Warburton Ranges film' was used effectively by activists to alert other Australians to the injustices experienced by these dispossessed nomadic people and to press governments to take greater responsibility for all Aboriginal Australians. The 'Warburton Ranges controversy', as it became known, led to the formation of the Victorian Aborigines Advancement League and, indirectly, to the formation a year later of the Federal Council for Aboriginal Advancement.