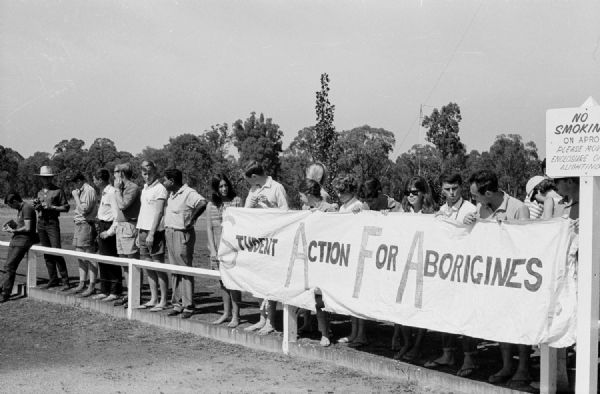 Student Action for Aborigines was formed at the University of Sydney in 1964
The Freedom Ride through western New South Wales towns in February 1965 drew attention to the racism in these towns. Aboriginal student Charles Perkins was, by the end of the journey, a national figure in the fight for Aboriginal rights.
Source: Tribune/SEARCH Foundation, Mitchell Library, State Library of New South Wales

In February 1965 a group of University of Sydney students organised a bus tour of western and coastal New South Wales towns. Their purpose was threefold. The students planned to draw public attention to the poor state of Aboriginal health, education and housing. They hoped to point out and help to lessen the socially discriminatory barriers which existed between Aboriginal and white residents. And they also wished to encourage and support Aboriginal people themselves to resist discrimination. The students had formed into a body called Student Action for Aborigines (SAFA) in 1964 to plan this trip and ensure media coverage.

Charles Perkins, an Arrente man born in Alice Springs, who was a third year arts student at the university, was elected president of SAFA. The group included Ann Curthoys who would later write a history of these events, Jim Spigelman who would later become Chief Justice of the Supreme Court of New South Wales and Darce Cassidy, an arts student who was also a part-time reporter for the ABC.

In 1964 a University of Sydney protest against racial segregation in the United States had brought comments from members of the public urging students to look to their own backyard if they wanted to draw attention to racial discrimination. This led to the planning of a fact-finding trip to western New South Wales towns so students could see for themselves the conditions of life for Aboriginal people. 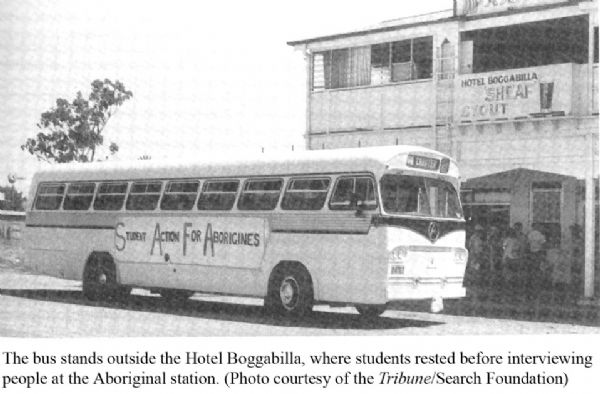 Student Action for Aborigines bus at Boggabilla
The students visited the Aboriginal reserve at Boggabilla where they were shocked by the living conditions.
Source: Tribune/SEARCH Foundation, Mitchell Library, State Library of New South Wales 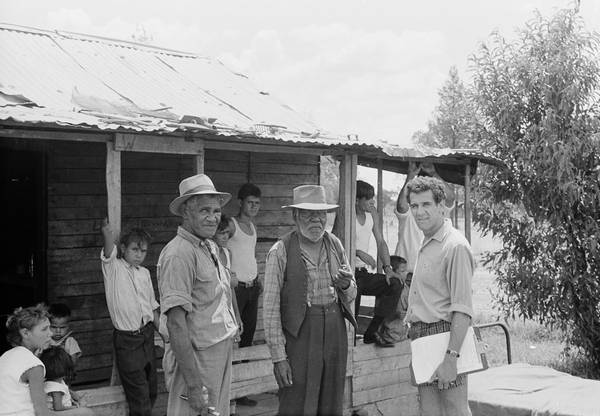 Charles Perkins speaks to Aboriginal residents at Moree
The Freedom Ride was both a fact-finding mission and a protest against racial segregation.
Source: Tribune/SEARCH Foundation, Mitchell Library, State Library of New South Wales

Where the Freedom Ride went

The Freedom Ride, as it came to be called, included visits to Walgett, Gulargambone, Kempsey, Bowraville and Moree. Students were shocked at the living conditions which Aboriginal people endured outside the towns. In the towns Aboriginal people were routinely barred from clubs, swimming pools and cafes. They were frequently refused service in shops and refused drinks in hotels. The students demonstrated against racial discrimination practised at the Walgett Returned Services League, the Moree Baths, the Kempsey Baths and the Boraville picture theatre. They not only challenged these practices, but they ensured that reports of their demonstrations and local townspeople's hostile responses were available for news broadcasts on radio and television. Outside Walgett Jim Spigelman trained his home movie camera on the hostile convoy of cars which followed the bus out of town at night and ran it off the road. Darce Cassidy recorded the angry conversations and filed a report to the ABC.

Captured on tape was the vice-president of the Walgett Returned Service League Club who said he would never allow an Aboriginal to become a member. Such evidence was beamed into the living rooms of Australians with the evening news. It exposed an endemic racism. Film footage shocked city viewers, adding to the mounting pressure on the government.

The central role of the film camera in this campaign demonstrated the growing sophistication of activists who recognised the need to show city dwellers what was happening in country towns. The campaigners drew parallels with civil rights movements elsewhere in the world, especially the United States. The news coverage punctured Australian smugness, borne of ignorance, that racism did not exist in Australia. 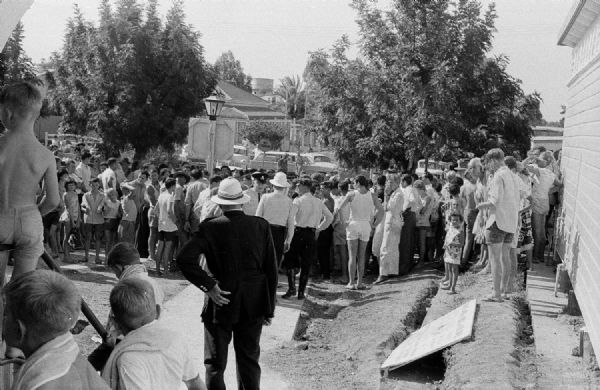 At Moree (northern New South Wales), which was known to be a town where segregation was practised, the students focused on the swimming pool. The pool became a scene of tension and aggression as they attempted to assist Aboriginal children from the reserve outside town to enter the pool while locals angrily defended the race-based ban. 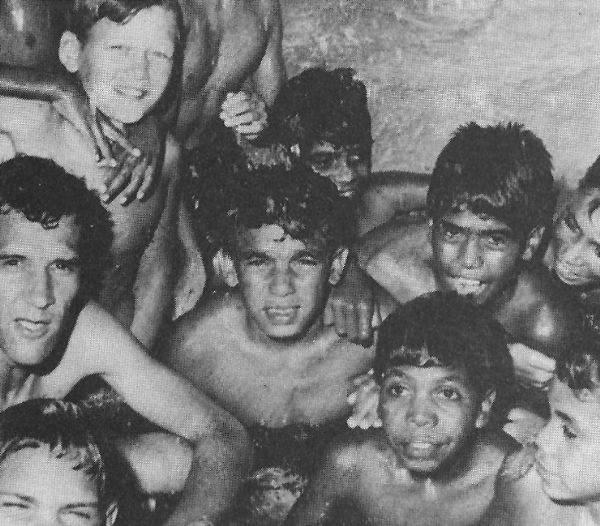 Responses to the ride

Crux, a Student Christian Movement periodical, ran a guest editorial on the significance of the Freedom Ride, and cartoonists like John Frith also addressed the issue.

'No genteel silence' a response to the Freedom Ride, by Ian Spalding

Download 'No genteel silence' a response to the Freedom Ride, by Ian Spalding [PDF 2696kb]

Getting in the swim!

More info on Getting in the swim!

Overseas newspapers such as the New York Times reported on the Freedom Riders and their reception in New South Wales country towns.

Charles Perkins reported these events to a crowd of 200 attending the 1965 Federal Council for the Advancement of Aborigines and Torres Strait Islanders (FCAATSI) conference in Canberra. Conference goers heard that one positive result of the students' activities was that the NSW Aborigines Welfare Board publicly announced that it would spend sixty-five thousand pounds on housing in Moree.

Federal Council for Advancement of Aborigines and Torres Strait Islanders, Reports and Resolutions of the 8th Annual Conference on Aboriginal Affairs, April 1965

Freedom Ride and you

More info on Freedom Ride and you

Later in the year Harry Hall, president of the Walgett Aborigines' Progessive Association, appealed to Perkins and other Aboriginal activists to return to Walgett to assist in the fight against the colour bar applied at the Oasis Hotel. Perkins and others did return to help in Walgett. The Freedom Ride through New South Wales towns and the publicity it gained raised consciousness of racial discrimination in Australia and strengthened the campaigns to eradicate it which followed.

See also Peter Read, 'Darce Cassidy's Freedom Ride', Australian Aboriginal Studies, 1988, no. 1, for Cassidy's transcript of a radio show which the ABC did not broadcast as it was 'considered too controversial by the ABC management'.