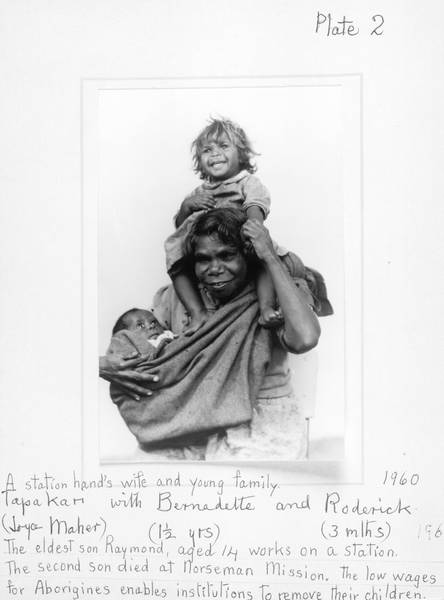 The old age pension and unemployment benefits were not available to Aboriginal Australians in the 1950s. The Social Services Act was amended in 1959 to include them but many impediments remained. Older people had no birth certificates so proof of age was difficult. Most people had not experienced Western education and were illiterate. They often didn't know that benefits even existed. A further impediment was that, under the amended act, benefits could not be claimed by people who were nomadic. Many Aboriginal people were, by necessity, itinerant workers and could be ruled ineligible for unemployment benefits when they were laid off after the muster.

The following pages provide a case study of the travails of one Kalgoorlie family. Such hardships were experienced by Aboriginal people all over Australia at this time.

The photographs featured in this section were taken in a Kalgoorlie photographic studio in 1960, arranged and paid for by Mary Bennett. Bennett had taught at the Mount Margaret Mission, north-east of Kalgoorlie in Western Australia and, on leaving the mission, had continued to provide assistance to the Wongi people of Kalgoorlie where she lived. 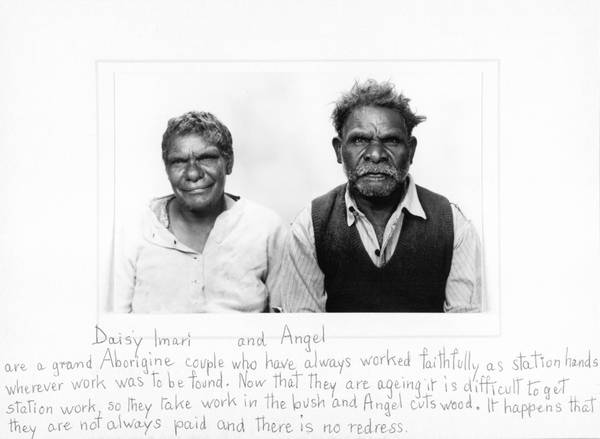 Daisy and Angel Imari, Kalgoorlie, 1960
Mary Bennett writes: 'Daisy Imari and Angel are a grand Aborigine couple who have always worked faithfully as stationhands wherever work was to be found. Now that they are ageing it is difficult to get station work, so they take work in the bush and Angel cuts wood. It happens that they are not always paid and there is no redress.'
Source: Box 12/5, Council for Aboriginal Rights (Vic.) Papers, MS 12913, State Library of Victoria

In what would turn out to be the last year of her life, Mary Bennett ensured that activists were aware of the suffering faced by people who did not fit into the social security system. She sent the photos to Shirley Andrews, secretary of the Council for Aboriginal Rights, who was campaigning for changes in both the law and in current practice with regard to the withholding of benefits.

In 2005 copies of the photos were returned to the families in Kalgoorlie. The elders in these families gave permission for their forebears' stories to be told in the interest of community education.