While the old Wongi people, original landholders of the Eastern Goldfields region in Western Australia, struggled to find a way to live when they were too old for work, other problems faced the next generation, living as fringe dwellers in Kalgoorlie. 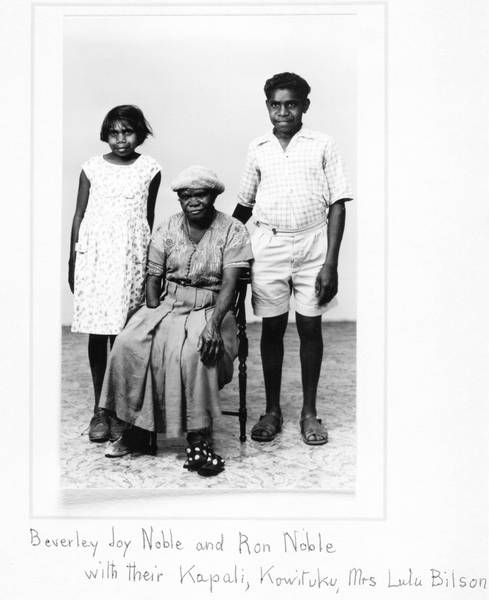 Lulu's daughter Bowee, married to Gidum (Tommy), led a precarious life in the streets of Kalgoorlie. In 1954 Mary Bennett described it to Shirley Andrews, Secretary of the Victorian Council for Aboriginal Rights:

I met Beverley Joy's father and mother in Wilson Street, the street leading to the station, yesterday. I suppose they were begging though they didn't beg from me. Bowee was carrying their new baby. She had a rag round her arm so I suggested going to the hospital for a dressing. Tommy said Bowee was afraid [to go to the hospital], baby naked, she hadn't washed its clothes. But where could she wash them? Was there any place except Paddy Hannan's memorial water-bag effigy in Kalgoorlie, a public drinking place? Would she be allowed to wash the baby's clothes there? And where would she dry them? On her person? It was hot enough. She is such a midget of a woman I think she is about 21. She is the dearly loved daughter of Lulu who came from the desert 20 years ago. One must see the white people's viewpoint too. I must try to find out more about this case.[1]

The baby that Mary Bennett described was Bowee's third child. She had already relinquished the older two to Kurrawang Mission as she was unable to provide food or shelter for them. Once there, the missionaries could claim the child endowment, which was not available to the parents. (Under clause 76 of the Social Services Consolidation Act, child endowment could be paid to the mission for support of these two children.) Bennett came to believe that Aboriginal parents were refused benefits to 'encourage' them to relinquish their children to missions. 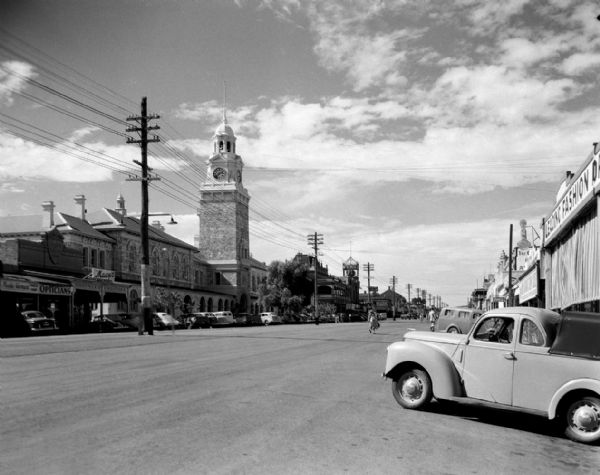 Kalgoorlie street, 1950s
Bowie Noble met her death on one of the streets of Kalgoorlie. Police believed that she may have been the victim of a hit and run accident.
Source: National Archives of Australia

Three years later Mary Bennett described life for people like Bowee and Gidum in a letter to the Western Australian Minister for Native Affairs:

The father carries the older child who is about three years old and the mother carries the year-old baby and any scrap of food that could serve for the children's next meal. She is quite young but she is always hungry and tired, there is no baby carriage for her baby, but a smile from the tired mother when she points to a photograph of her little daughter who, with the eldest brother, was placed in a mission to be fed and sent to school. The little daughter was chosen to present a bouquet to the Queen. While the two older children of this family of four are allowed to have Child Endowment because they live in a mission, the mother is refused Child Endowment because the faithful soul moves around with the father in his struggle for employment. [2]

Postscript: Bowee's life continued to be difficult and stressful. Her itinerant life with Tommy continued. The family was impoverished. Their son Neil died in 1958, aged three, from septicaemia. Another son, Barry, died of gastroenteritis the following year just short of his second birthday. In December 1967, Bowie was found dead in Hannan St, Kalgoorlie, where she had lain for three days before her death was reported. She was 39 years old.