On 27 April 1971, Mr Justice Blackburn ruled against the Yirrkala people in their case against Nabalco and the Commonwealth of Australia. In a 263-page judgment Blackburn concluded that:

the relationship between clan and land did not amount to proprietorship as that is understood in our law; and that the clans had not sustained the burden of proof that they were linked with the same land in 1788 as now; that no doctrine of common law ever required or now requires a British government to recognise land rights under Aboriginal law which may have existed prior to the 1788 occupation; that Aboriginal land rights in Australia were never expressly recognised; and that if the clans had had any rights they would have been effectually terminated by the mining (Gove Peninsula Nabalco Agreement) Ordinance 1968. [1]

The Yirrkala people were shocked by this result. On 6 May 1971, they sent representatives to Canberra to present a statement to Prime Minister William McMahon.

English translation of Yirrkala statement in the Gupapunyngu language

This document is in Bain Attwood and Andrew Markus, The Struggle for Aboriginal Rights: A Documentary History, Allen and Unwin, 1999, pp. 236-237

The Prime Minister assured them that the newly established Ministerial Committee investigating Aboriginal issues would consider how to protect reserve lands for their people's ceremonial, religious and recreational use; how to give residents the tenure necessary for their commercial enterprises; and how to purchase land for Aboriginal people. [2]

Peter Howson, Minister for the Environment, Aborigines and the Arts, and Ralph Hunt, Minister for the Interior, who were members of this committee, were both firmly opposed to the idea of an Aboriginal right to land. The Council for Aboriginal Affairs, chaired by Dr HC Coombs, presented the Yirrkala people's case to Prime Minister McMahon, with little success.

Meanwhile, the Gurindji people were still fighting for the right to their traditional lands at Wattie Creek. Trade unionists and students showed their support in the May Day march of 1971. 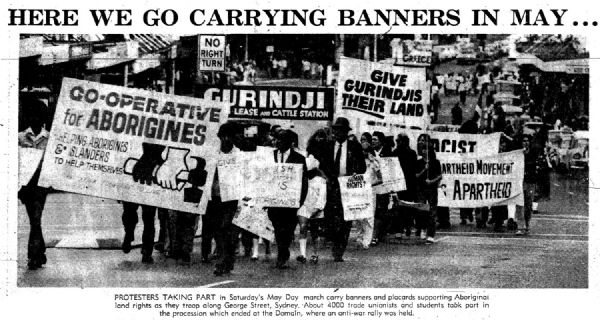 After nine months of deliberation, the government chose Australia Day to announce that there would be no Aboriginal title to land. Instead, under Northern Territory legislation, which had come into operation at the end of 1970, Aboriginal people would be encouraged to apply for leases which would be considered provided that the land was put to 'reasonable' economic or social use. [3]