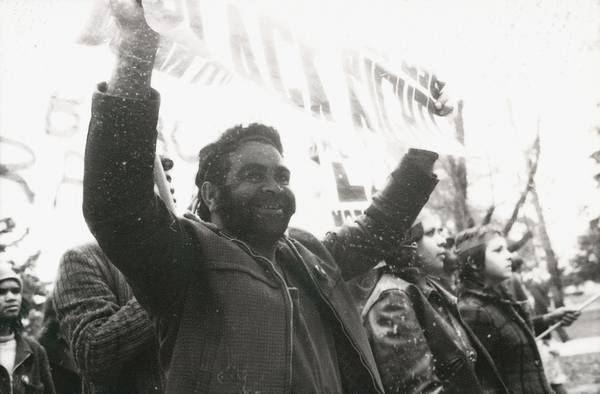 'Down with Whites who refuse Black Rights', this banner stated
Support for the Aboriginal Embassy grew in 1972, especially after police violence against the protestors was captured on film in July.
Source: Ken Middleton collection, National Library of Australia

To Minister for the Environment, Aborigines and the Arts, Peter Howson, the Embassy was an illegal act of trespass and the protesters were 'unrepresentative militants'. He refused to speak to Embassy representatives, which further boosted public sympathy for the protesters. [1]

In May, the Minister for the Interior, Ralph Hunt, announced that a new ordinance making it an offence to camp on unleased land in Canberra would soon come into effect. The ordinance would include the power to remove those who did not comply. In a conciliatory gesture, Hunt offered a lease on which to build an Aboriginal club. 'A 'Club' is not Land', the protesters replied.

Twenty-six Labor Members of Parliament said they would physically obstruct any move against the Aboriginal Embassy.