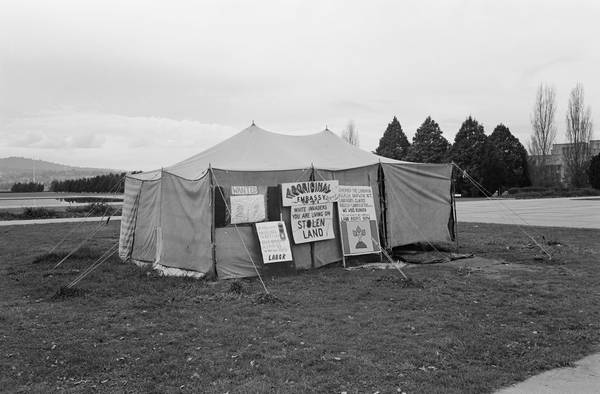 'You are living on stolen land': the sign on the Aboriginal Tent Embassy, Canberra, 1974
From 1972 the lawns opposite what is now Old Parliament House continue to be a site of protest for Indigenous Australians.
Source: National Archives of Australia, Canberra

The lawns opposite what is now Old Parliament House have become an ongoing site for protests at the failure of government policy regarding Indigenous Australians. Embassy tents have stood on this land at different times since 1972. They create a discomforting visual presence which reminds governments and people, from Australia and elsewhere, of a continuing Indigenous underclass with more health problems, less education and a much shorter life span than other Australians. The way in which the image of the tents suggests the poverty of Aboriginal Australia contrasts with the idea of an embassy that has the power to represent a group to another government. The resulting symbol is one which highlights Indigenous people's dispossession and lack of representation in their own land.