The argument for citizenship to be earned

In 1950 Paul Hasluck, the new federal member for Curtin, had raised the issue of government responsibility for Aboriginal Australians in the House of Representatives. Hasluck asked the Commonwealth Parliament:

As the supreme voice of the Australian nation, to ensure that, irrespective of where the constitutional powers lie, the practical task of the betterment of the conditions of the natives throughout the Commonwealth shall be undertaken.

He also asked parliamentarians to think about how other nations might judge Australia:

When we enter into international discussions, and raise our voice, as we should raise it, in defence of human rights and the protection of human welfare, our very words are mocked by the thousands of degraded and depressed people who crouch on rubbish heaps throughout the whole of this continent.

The following year Hasluck became the Minister for Territories and in this position he was able to develop what would become the Commonwealth's approach to Aboriginal policy. He persuaded the federal government to finance a Northern Territory program which would see government reserves becoming training institutions, preparing Aboriginal residents for assimilation into mainstream Australian society. At the 1961 Native Welfare Conference he gained the support of the states for a joint policy of assimilation.

Hasluck believed that, over time, Aboriginal Australians would become similar to other Australians and that their sense of connection to kin would diminish. He considered that citizenship should be earned and that as people 'grew into the society that they would inhabit', as he put it, they would be freed from the restrictions which state and territory protection acts and ordinances placed on their liberty. 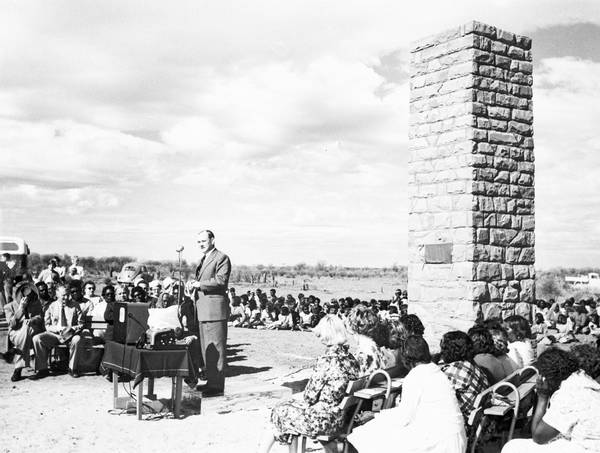