The press and the Australian public were outraged at the gaol sentence imposed on Albert Namatjira, and his death, less than a year later, reignited community anger at his treatment. Some wrote of a deep sense of shame. Others referred to the right of an Australian citizen to share a drink with a mate. Some viewed alcohol as 'white man's curse'. The consensus, however, was that Namatjira had been treated unjustly.

Rise and fall of Namatjira

More info on Rise and fall of Namatjira

The case led to a public questioning of the legal status of Aboriginal Australians. The outrage over Namatjira's gaoling was of a different kind to that of the Warburton Ranges controversy in 1957. In the earlier instance people were shocked by images of severe malnutrition and serious illness and they responded as they did to a famine in Africa, wanting to give money for food relief. The Namatjira case presented a different situation. Here was an Aboriginal man who seemed to be a remarkably successful example of the assimilation policy in action, and yet he was gaoled for an activity - drinking with a relative - which was not a crime for any other Australian. The case indicated a flaw in the federal government's attempt to offer citizenship to Aboriginal Australians.

The news stories referred to a man 'caught between two civilisations'. 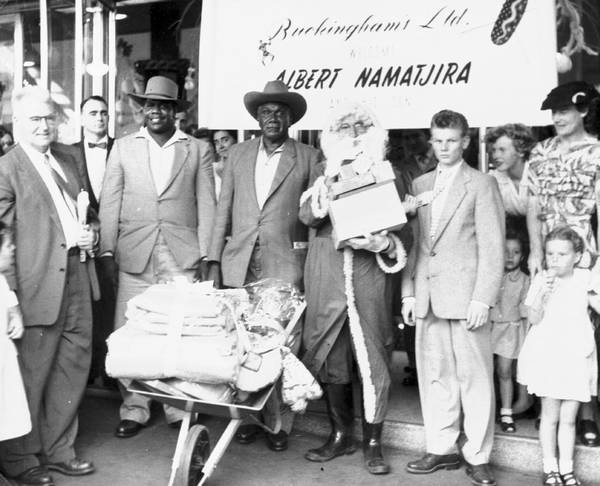 Albert Namatjira and his son Keith in front of Buckingham's store, Sydney, mid 1950s
As his wealth grew, Albert Namatjira brought back goods from the cities he visited to share with his kinsfolk.
Source: National Library of Australia 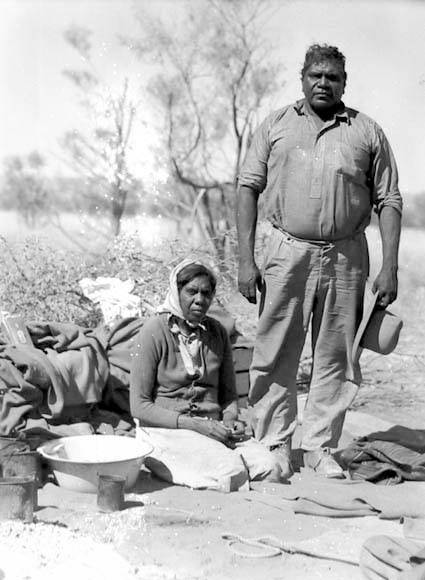 Albert Namatjira and his wife, Rubina, 1946
Namatjira was happiest in his own Arrente country (a large area around Alice Springs) where he grew up and which he loved painting.
Source: National Library of Australia

Members of the Federal Council for Aboriginal Advancement, however, wrote letters to editors pointing out that this was not just a case of a man caught between two worlds, but rather the case of a man trapped by laws which had to be changed. Stan Davey, who was the secretary of both the Victorian Aborigines Advancement League and of the Federal Council for Aboriginal Advancement, referred to the Universal Declaration of Human Rights [1] in arguing that it must be as free citizens that government sought to integrate Aboriginal people with other Australians. Shirley Andrews, Secretary of the Council for Aboriginal Rights, pointed out that an Aboriginal Territorian could neither get a bed in a hotel (even if he didn't drink) nor rent a home, nor travel first class on the train.

1 See the full text of the Universal Declaration on Human Rights on the United Nations website. (This link opens in a new window.)