The proposal to use the Australian desert to test British nuclear weapons became public in 1946-47. President of the South Australian Aborigines Advancement League, Charles Duguid, and anthropologist Donald Thomson led a protest movement against the use of tribal land for these purposes. 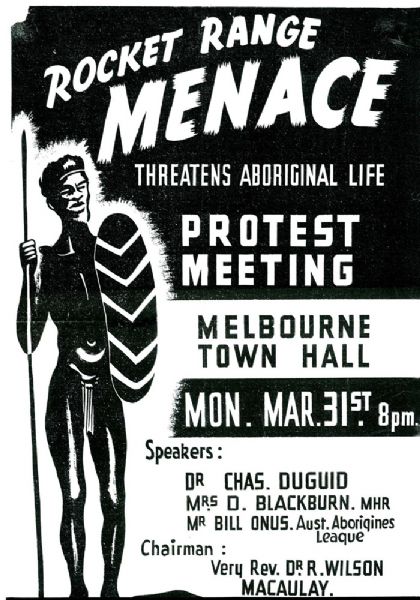 Both men argued publicly that the Australian government was unprepared to consider their objections because they were based on expert understanding of the likely impact of the rocket range on the desert dwelling people.

The Aborigines and the Rocket Range, Donald Thomson, May 1947

Download The Aborigines and the Rocket Range, Donald Thomson, May 1947 [PDF 88kb]

Doris Blackburn, Independent Labor Member for Bourke, was the only federal parliamentarian who spoke in opposition to the joint atomic testing proposal.

Despite active and vocal community protest from both peace groups and Aboriginal rights groups, the project went ahead. The Commonwealth government assured protesters that no roads would be constructed.

Ten years later prospectors from the South West Mining Company and staff from the Giles meteorological station (which supported the atomic weapons trials at Maralinga and Woomera) sped along graded roads built to support these ventures.

In his 1957 Advancement League presidential address, Charles Duguid spoke of the responsibility that rested with the British, Australian, South Australian and Western Australian governments towards desert nomads whose territory they had invaded.

All that the federal government had done was appoint two welfare officers to inform nomadic peoples about the nuclear tests. When we consider cultural differences, the fact that only one of these men spoke an Aboriginal language, the vast distances (thousands of square kilometres from Woomera, north-west of Adelaide, to the north-western coast of Australia), and few roads, it's hard to imagine how they could have achieved this.