By 1965 the Legislative Reform Committee of what by then had become the Federal Council for the Advancement of Aborigines and Torres Strait Islanders (FCAATSI) had taken responsibility for keeping the Constitutional amendment issue politically alive. 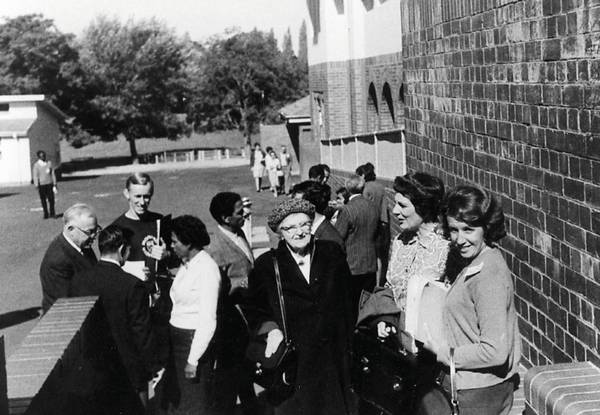 Lorna Lippmann, as convenor of this committee, wrote to all members of Parliament explaining that section 51 (xxvi) needed to be amended so that 'the federal government may take positive steps to improve the lot of Aborigines'. Don Chipp, Minister for Tourism, expressed concern that if the phrase 'other than the aboriginal race in any State' was removed from section 51 (xxvi) a future government would be able to discriminate against Aboriginal people. Lippmann, in response, pointed out that the existence of the phrase had not prevented the Commonwealth from discriminating against Aboriginal people so far. As evidence she cited the failure of the Commonwealth government to 'pay unemployment benefits to Aboriginal people in the north-west of Western Australia, and the well below award wages that have prevailed for most Aboriginal workers in the Northern Territory'. [1]

Following the passage of the Constitution Alteration (Repeal of Section 127) Bill in February 1966, Barrie Pittock, who succeeded Lorna Lippmann as convenor of this committee, refined a petition sent to the Committee by Mr AS Luchetti, MP. This one asserted that the paragraph 'the people of any race, other than the aboriginal race in any State, for whom it is deemed necessary to make special laws' implies a discrimination against Aboriginal people. The petitioners who signed this form asked that the Commonwealth be given power to 'make laws for the advancement of the Aboriginal people'. 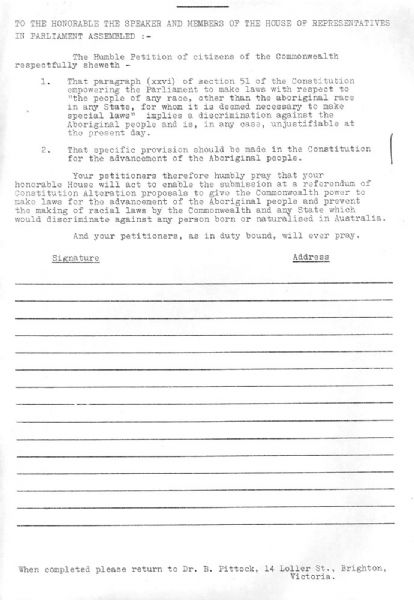 Referendum petition, FCAATSI 1966
This petition was prepared by the Legislative Reform Committee of FCAATSI. It shows the hopes which this committee had for greater Commonwealth involvement in Aboriginal affairs.
Source: Barrie Pittock personal papers

Members of the Legislative Reform Committee envisaged a future when such 'advancement' might include the establishment of an Aboriginal arts board, or an Aboriginal education foundation along the lines of the Maori educational foundation in New Zealand.