In May 1964 Arthur Calwell, Leader of the Labor Opposition, opened the matter to debate with his Constitution Alteration (Aborigines) Bill. Following the petitions, which continued to be tabled, his Bill proposed that section 127 of the Constitution be repealed and that the words 'other than the aboriginal race in any State' be removed from section 51 (xxvi).

Attorney-General Bill Snedden described section 127 as an anachronism. It may have been difficult to count Aboriginal people in 1901 but by 1964, where possible, they were counted. This section, he agreed, may be offensive but it was not discriminatory. Charles Barnes, the Minister for Territories, considered that there were grounds for amendment but argued that it was not important enough to hold a referendum in order to repeal this section. 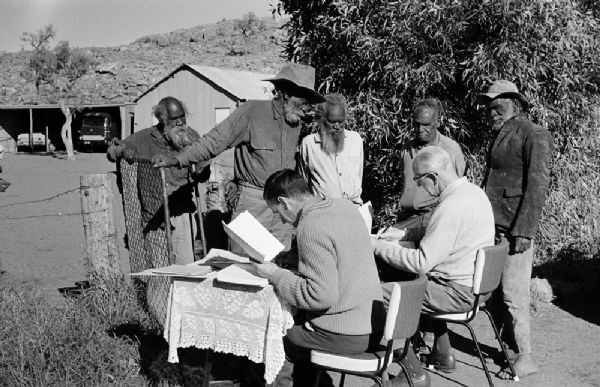 Census collection, Ernabella Mission, South Australia, 30 June 1966
The Australian Bureau of Statistics did gather data from Aboriginal people who lived on reserves, but prior to the 1967 Referendum these numbers were subtracted from the total. Here Bill Edwards and Arch Trickett are officiating. The names of the other men are unknown.
Source: Hilliard collection, Australian Institute for Aboriginal and Torres Strait Islander Studies, Canberra

Debate over the removal of 'other than the aboriginal race in any State' also centred on the meaning of 'discrimination'. Attorney-General Bill Snedden equated 'special laws' with 'discriminatory laws', by which he implied negative discrimination, and argued that the government wanted to move to a situation where no special legislation was necessary. Kim Beazley (senior) argued that discriminatory laws, if they discriminated positively, were what was needed when infant mortality in some parts of Australia was 208 in 1000 or ten times greater than the national average. Gordon Bryant reminded members that the Repatriation Act discriminated in favour of returned servicemen and women in order to assist them with housing, medical needs, pensions, land settlement and education. The Bill was lost.

Discussion about the issue continued in Cabinet. The argument circulating since the 1962 National Petition campaign that section 51 (xxvi) was discriminatory seemed to have had some effect on public perception.

In 1965 a group of students from the University of Sydney, Student Action for Aborigines, organised a bus trip through western New South Wales towns to draw public attention to racial discrimination. Dubbed a 'Freedom Ride' (after the freedom rides in the southern US states) this group, led by Charles Perkins, used the media to show the public evidence of discriminatory practices and by-laws against Aboriginal people in these towns.

Attorney-General Bill Snedden told Cabinet in February 1965, 'I think that the public believes that the underlined words [other than the aboriginal race in any State] amounts to a discrimination'. While Snedden rejected this interpretation, he argued that Cabinet should take account of the electors' views of the matter. Acceptance of the campaigners' interpretation of these clauses in the Constitution was growing, making it difficult for the government to put an opposing view without appearing to the electorate in a negative light.

Six months later the Attorney-General took Cabinet through the arguments for and against amending section 51 (xxvi) and concluded that the Commonwealth should hold a referendum to empower it to amend section 51 (xxvi) so that it could 'implement its policy to the advantage of the aboriginal people'. Cabinet was still not persuaded.

The Prime Minister used his first reading speech to explain why he was not including the amendment of section 51 (xxvi) in the Bill. Menzies argued that the words 'other than the aboriginal race in any state' was a protection against discrimination by the Commonwealth Parliament. He held that if the phrase was removed the Parliament could set up 'a separate body of industrial, social, criminal and other laws relating exclusively to Aborigines'. This was a valid argument but by this time the electorate so strongly favoured the view that the clause was discriminatory and its removal would be a positive step for Aboriginal people, that the Prime Minister's point appeared academic and unconnected to the debate taking place in the community. The possibility he outlined seemed unthinkable. The Bill was passed and a date was set for a referendum.

The retirement of Menzies early in January 1966, after more than eighteen years as Prime Minister, provided a new political environment in which to debate this matter. The new Prime Minister Harold Holt announced that the planned referendum to repeal section 127 would be deferred, and debate reopened on whether the amendment of section 51(xxvi) should be included in the referendum question to be put to the voters.

In March 1966, Liberal backbencher William Wentworth introduced a Private Member's Bill, which proposed that the whole of section 51 (xxvi) be deleted. He proposed a new section, 117A, which would prevent the Commonwealth and states from making or maintaining any law 'which subjects any person who has been born or naturalised within the Commonwealth of Australia to any discrimination or disability within the Commonwealth by reason of his racial origin'. Wentworth's Bill also failed to get the necessary support.