On 27 May 1967 over 90 per cent of the Australian electorate did vote YES on the Aboriginal question. On the other question put, concerning the relationship between the number of senators and the number of lower house members, the voters said NO to the proposed change.

The size of the YES vote was vitally important. During the ten years of the campaign many laws had changed: discriminatory clauses had been removed from Commonwealth laws, and by 1967 Aboriginal people living in all states but Western Australia and Queensland no longer had their civil rights as Australian citizens curtailed by state laws. The huge YES vote would make it difficult for the government to ignore its new power. 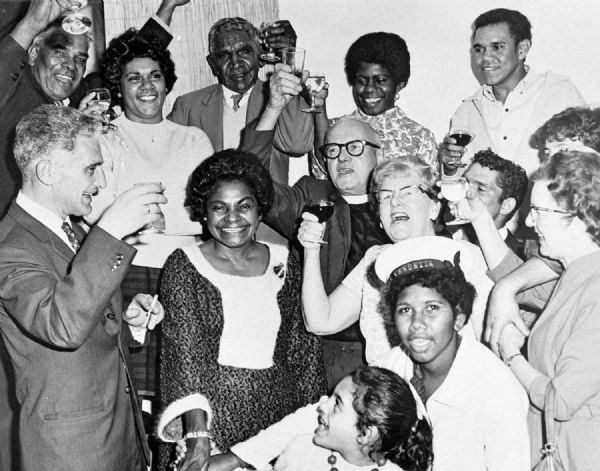 Victory celebration, Tranby College, Sydney, June 1967
Members of the NSW Vote YES committee toast their campaign director, Faith Bandler (front, second from left), after the success of the 1967 Referendum. Hans Bandler to her right, Lilon Bandler in front. Bert Groves is directly behind Faith Bandler. Harriet Ellis is behind Hans Bandler. Edna Blackshaw is on Faith Bandler's left and Rev. Alf Clint is behind her on the right.
Source: Photographer unknown.

For the campaigners, this was a moment of triumph and celebration after a decade of work for this end.

'After the referendum - what?' asks Gordon Bryant

More info on 'After the referendum - what?' asks Gordon Bryant

Stan Davey, General Secretary of the Federal Council for the Advancement of Aborigines and Torres Strait Islanders (FCAATSI), congratulated the Prime Minister. Harold Holt and FCAATSI outlined their view of what should happen next.

While understanding the symbolic value of the passage of the referendum after a decade of work, FCAATSI president Joe McGinness cautioned supporters. 'Winning the referendum', he told them, 'is an important step forwards - but it is only a first step'. He reminded people that 'the government is showing no hurry to legislate for us on education, housing, wages, trade training, land grants and many other things we need'. [1]