In 1962 the Federal Council for Aboriginal Advancement (FCAA) Annual Conference decided to run a national petition campaign. The goal was to collect a quarter of a million signatures from all states.

The core Melbourne executive of Gordon Bryant, Stan Davey, Doug Nicholls, Barry Christophers and Shirley Andrews worked on a carefully worded draft which was sent to delegates in other states for refinement. 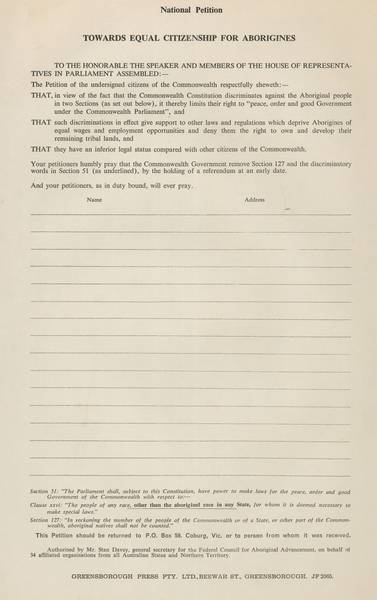 The wording of this petition was quite different from that of earlier petitions. It referred to 'discriminations' which gave 'support to other laws and regulations which deprive Aborigines of equal wages and employment opportunities and deny them the right to own and develop their remaining tribal lands'. The Melbourne executive composed and circulated a leaflet which explained the arguments for change. 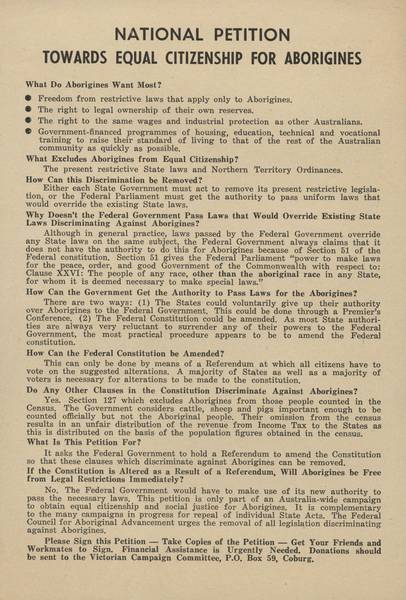 Pastoral industry awards, for example, contained clauses which excluded the many Aboriginal stockmen and women from the award wage and conditions enjoyed by other workers. Some Commonwealth laws specifically excluded Aboriginal people, such as the Tuberculosis Act 1948. In Queensland, under the Aborigines Preservation and Protection Act 1939 people could not marry without permission, nor were they legal guardians of their children. In Western Australia Aboriginal people could apply for a certificate of citizenship under the Natives (Citizens Rights) Act 1944, but they had to prove that they had cut off ties with their extended family, had been honourably discharged from the armed services and were not carrying certain contagious diseases. These were some of the 'discriminations' which the petition drafters had in mind. 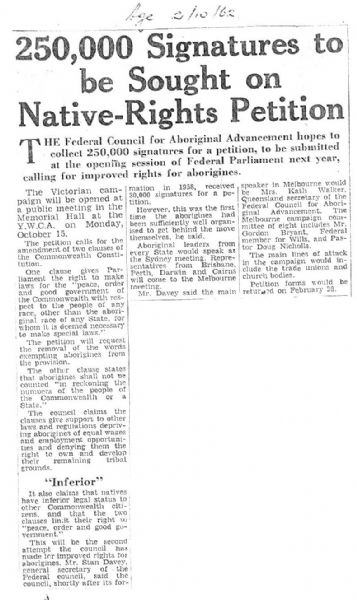 The Age reports a goal of 250,000 signatures for the referendum petition
The National Petition for a referendum to change the constitution was launched in October 1962.
Source: The Age, 2 October 1962

For twelve months from October 1962 to October 1963 activists set up tables in the streets of all capital and regional cities and in country towns, urging people to sign the petition. Sporting clubs, community organisations, churches and unions were all targeted. This was a broad community education exercise as well as a petition gathering one. Gordon Bryant, MHR and President of the Aborigines' Advancement League, set out the arguments for Constitutional change.

Gordon Bryant, arguments for a referendum, 1962

More info on Gordon Bryant, arguments for a referendum, 1962

Alick Jackomos recalls petition-gathering for the referendum with Doug Nicholls

Alick Jackomos, who was FCAA state secretary for Victoria at about this time, recalls his street campaigning:

By the end of this year of intense activity over 100,000 signatures had been collected. This was short of the mark but impressive when we remember that the work was carried out after people had finished their work, on weekends, and at evening meetings.

The Melbourne-based national campaign committee now considered how to get the maximum effect from petition forms. They sorted over 6000 forms according to electorates and over a seven-week period in 1963, every sitting day in the House of Representatives began with the tabling of these petitions. One parliamentarian commented that the petitions had become so reliable and regular that they were like the prayer with which Parliament commenced. Even Prime Minister Robert Menzies tabled a petition from his upper-middle class Kooyong constituents on 11 September 1963. 'Will the Prime Minister support the petition?', Gordon Bryant asked. Menzies didn't answer this direct question but upheld the right of his constituents to petition parliament.