Campaign to save Lake Tyers 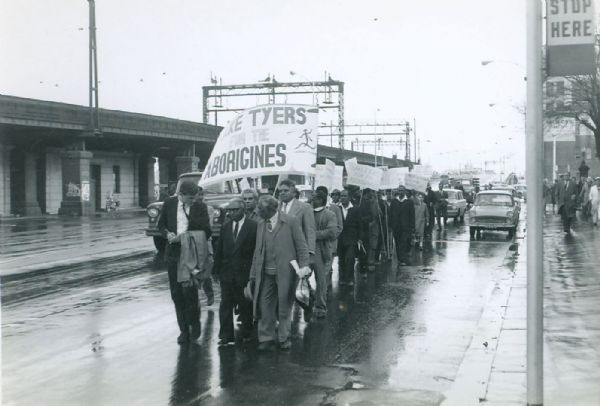 A coalition of activists forms

In May 1963, Melbourne-based bodies - the Australian Aborigines' League, the Victorian Aborigines Advancement League and the Council for Aboriginal Rights - launched a campaign to support residents who wished to save Lake Tyers. Pastor Doug Nicholls, a member of the Aborigines Welfare Board, disassociated himself from the Board's rehousing policy, stating: 'Assimilation in a forced manner will destroy my People's social structure and kill them as a people.' [1]

Pauline Pickford, Honorary Secretary of the Council for Aboriginal Rights, had earlier visited the Lake Tyers community and established friendly relationships with people living there. Residents responded to her genuine interest in assisting them by writing letters describing their treatment. One woman complained that 'every time my husband comes here on to the mission to see us the manager always gets the police out here to chase him about just like an escaped convict'. [2] Pickford encouraged people to join the Council for Aboriginal Rights. Two leaders of the campaign for Lake Tyers, Gene Mobourne and Laurie Moffatt, did become members and, along with other Lake Tyers residents, attended annual conferences of the Federal Council for the Advancement of Aborigines and Torres Strait Islanders (FCAATSI) in Canberra.

Pastor Doug Nicholls told Melbourne Age readers how much birthplace meant to Aboriginal people and that moving people far from their homes was doomed to fail. He also pointed out that people had not been prepared for the change.

Doug Nicholls to the Editor of The Age

More info on Doug Nicholls to the Editor of The Age

As was the case with Aboriginal people in other isolated communities, many at Lake Tyers did not realise that there were others in similar circumstances fighting for their land. Pickford wrote to Gene Mobourne: 'I've enclosed a press cutting which will show you that your problem is part of a big problem, which is getting world wide publicity'. [3]

In addition, Aboriginal activists from other parts of Australia - Dexter Daniels from Roper River in the Northern Territory, Joe McGinness and Gladys O'Shane from Cairns and Kath Walker from Brisbane - visited Melbourne and Lake Tyers to lend support. The Council for Aboriginal Rights reported that the 1963 meeting of FCAATSI argued for a 'special form of land tenure granted to Aborigines so that ownership of reserves may not be superseded even by mineral rights'.

The Victorian State Executive of the Communist Party of Australia produced and circulated a leaflet which set out its ideas for the future of the reserve.

'Lake Tyers and the Aborigines of Gippsland'

Reprinted from the Victorian Guardian, 2 May 1963

More info on 'Lake Tyers and the Aborigines of Gippsland'

At the 1965 FCAATSI conference, people shared their painful stories of dispossession. Laurie Moffatt told of the effects of the assimilation policy being pursued by the Victorian government. People were driven from homes occupied by generations of their forebears. Charlie Carter, also from Lake Tyers, said that the Board had destroyed the better homes or caused them to be removed so that people were forced to live in squalid conditions.

Anthropologists such as Dr Diane Barwick and Donald Thomson favoured the retention of Lake Tyers for the residents, expressing their vehement objections to the government's policy of 'coercive assimilation' in letters to the daily papers.

Donald Thomson to the Editor of The Age

More info on Donald Thomson to the Editor of The Age

In the research for her PhD thesis, 'A Little More than Kin', Barwick had gained insights into how Victorian Aboriginal communities operated and supported their members. In 1964 she made a submission to the minister on the future of Lake Tyers. She criticised the Board for failing to canvas Aboriginal opinions. She criticised Charles McLean for failing to speak with those Lake Tyers residents who had made submissions to his Board of Inquiry in 1956. She drew attention to the fact that, in Canada and the United States of America, assimilation which ignored social and cultural identity had been abandoned as counterproductive more than a decade earlier. The model that replaced this approach stressed the importance of consultation with Indian communities for the success of a program. Indeed, the Indian Act provided for self-governing communities on reserves. Barwick pointed to the apparent ignorance of Victorian policy-makers about overseas programs and approaches to colonised indigenous minorities.

Submission by Dr Diane Barwick to the Victorian government

In 1963, Nicholls led a march in Melbourne of 40 Aboriginal people, mostly from Lake Tyers, protesting Board policy. 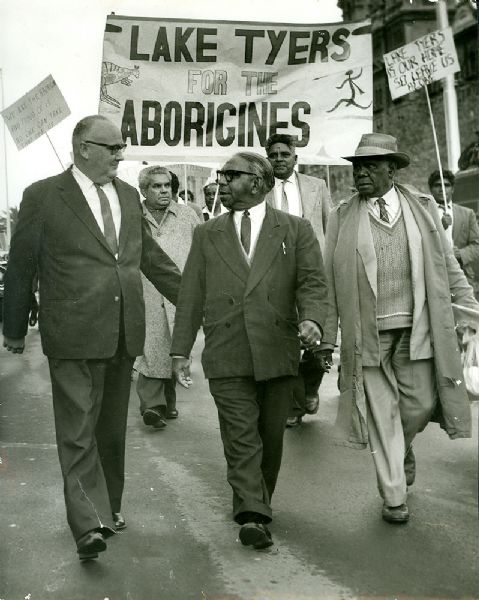